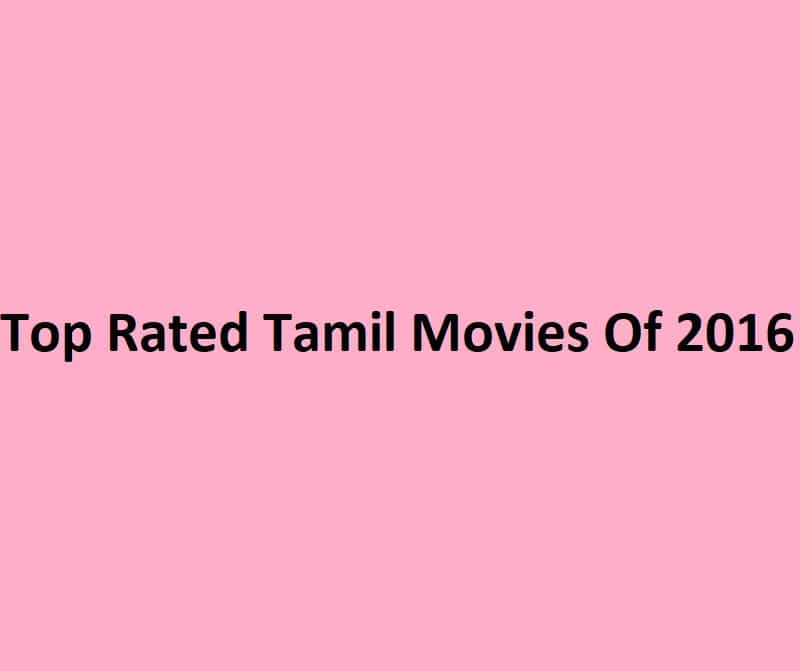 Tamil movie industry is the most anticipated industry in India. Whereas, it is the 3rd largest film industry all over the world after Bollywood. Also, it is one of the oldest film industries all over the world. The Tamil Cinema is also known as Kollywood that is based on the state of Tamil Nadu. In fact, more than 100 movies are released in a year in the Tamil film industry. In this article, you will find details about the list of Top rated Tamil movies of 2016.  The list given below is the top-rated Tamil movies of 2016 that you should miss watching.

Visaaranai is one of the best movie in 2016 that you should watch once in your lifetime. The movie also got many awards and positive response from the critics and fans. Whereas, Visaranai is a 2016 Indian Tamil-language docudrama crime thriller film written and directed by Vetrimaaran. The starts featuring Dinesh, Anandhi, and Aadukalam Murugadoss in the lead roles. The story of the movie tells us about the four laborers who are being tortured by the police to confess to a theft they have not committed.

Joker is a 2016 Indian Tamil-language political satire film, written and directed by Raju Murugan of Cuckoo fame and produced by S. R. Prakash Babu and S. R. Prabhu, under the banner Dream Warrior Pictures. The story of the movie revolves around the Mannar (protagonist), a villager who declares himself to be the Indian President, protests the absurdities of the government. The movies featuring Guru Somasundaram, Ramya Pandiyan, and Gayathri Krishnaa. You can watch this movie in some of the legal video streaming sites. You should watch this movie once in your lifetime. The fans and critics have given the movie a positive response.

Dhuruvangal Pathinaaru also known as D-16, is a 2016 Indian Tamil-language neo-noir crime thriller film written and directed by Karthick Naren and starring Rahman in the leading role. Featuring a predominantly new cast and crew, the film went on to gain positive reviews from film critics as well becoming a critical box office success. Whereas the story of the movie revolves around a police officer retires after an accident during a case investigation. Years later, he is forced to relive the past as he narrates the story to his friend’s son. Also, If you missed watching this movie then you should watch this movie.

The movie is about two men Gandhi and Pandi decided to get a passport and travel to London to get rid of debts in their village. Things didn’t happen has they planned. The movie gets many twist and turns and you will see how they struggle to go to London. Aandavan Kattalai is a 2016 Indian Tamil language satirical drama film co-written and directed by M. Manikandan. Whereas, the film features Vijay Sethupathi and Ritika Singh in the lead roles, with Pooja Devariya, Nassar and Yogi Babu amongst others in supporting roles. The movie is produced by G. N. Anbu Chezhiyan under the production banner of Gopuram Films and Tribal Arts.

Iraivi is a 2016 Indian Tamil language drama film written and directed by Karthik Subbaraj and produced by C. V. Kumar in association with K. E. Gnanavel Raja and Abinesh Elangovan. Whereas, the film features an ensemble cast with S. J. Surya, Vijay Sethupathi, Anjali, Bobby Simha, Kamalinee Mukherjee and Pooja Devariya playing leading roles. If you missed watching this movie in the theatre you can watch this movie on some of the legal video streaming platforms. The story of the movie revolves around an alcoholic filmmaker and his friends who bring trouble to the women in their lives.

Ammani is a 2016 Indian Tamil-language drama film written and directed by Lakshmy Ramakrishnan. Whereas, this movie features herself, Subbalakshmi and Nithin Sathya in the leading roles. Also, the film is produced by Ven Govinda, released on 14 October 2016. Ammani movie has got a positive response from the critics as well as audience. The story of the movie revolves around the A bond is forged between an aged ragpicker and a younger woman. The movie takes lots of twists and turns all over the movie.

Kuttrame Thandanai is a 2016 Tamil language neo-noir psychological thriller film cinematographed and directed by M. Manikandan and produced by S. Harihara Naganathan, S. Muthu, S. Kaleeswaran under Don Production co-produced with Tribal Art Productions. The film starring Vidharth, Pooja Devariya and Aishwarya Rajesh in the leading roles.[1] Supporting role played by Rahman, Nassar, Guru Somasundaram, G. Marimuthu, and Yogi Babu Played guest appearances. If you missed watching this movie in the theatre then you will find this movie on some of the legal video streaming sites.

24 is a 2016 Indian Tamil-language science fiction action film written and directed by Vikram Kumar. Whereas the movie is based on the concept of time travel, the film stars actor Suriya in a triple role, along with Samantha Ruth Prabhu as the female lead. Additionally, the Surya fans had loved the movie and the movie has generated a good amount of revenue in the box office collection. Whereas, if you missed watching this movie then you can watch this movie on Hotstar which a legal video streaming platform. Do not miss watching this movie.

Irudhi Suttru in Tamil is a 2016 Indian sports action drama film written and directed by Sudha Kongara. This movie is Made as a bilingual in Tamil and Hindi languages, the film features R. Madhavan in the leading role as a boxing coach, with newcomer Ritika Singh as an aspiring boxer. Whereas, the producer of the movie are S. Sashikanth, C. V. Kumar, and Madhavan, under the production banner of Y NOT Studios, UTV Motion Pictures, and Thirukumaran Entertainment. If you missed watching this movie then you can watch this movie on some of the legal video streaming platform. We recommend not to download this movie from any illegal sites. As per Indian Copyright law, you and your family can be in trouble while caught downloading.

Pichaikkaaran is a 2016 Indian Tamil-language action thriller film directed by Sasi, starring Vijay Antony. Whereas, the movie has got its release on 4 March 2016. In fact, the Telugu dubbed version was titled as Bichagadu and was released on 13 May 2016. Additionally, in 2017, the ]movies were dubbed in Hindi as Roadside Rowdy which also got a good response. The film became a big success at the box office. The movie has generated a good box office collection and got a positive response from the critics and audiences. Whereas, the story of the movie revolves around a rich businessman chooses to lead the life of a homeless beggar for a period of 48 days in the hopes that he could cure his mother, who is on the brink of death.

If you have any queries or any other that you would like to mention in this list then you can feel free to drop it in the comment section below. Also, bookmark this page for more updates and it brings you the latest movies news and updates.