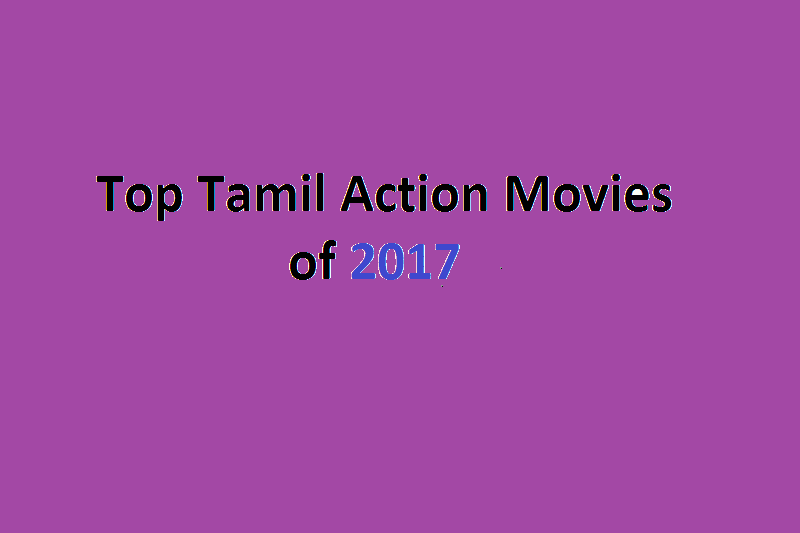 The Tamil language film industry has produced and released over 5000 motion pictures since the release of its first sound film. And Most of the film is action-based movies there was a time when people only preferred action-based genres. In 2017 there were many Tamil film which was released and there is no track of all those movies. So In this article, we are here to show you all the Tamil Action Movies of 2017 that you can find.

Vivegam is a 2017 Indian Tamil-language action thriller film written and directed by Siva. The movie features Ajith Kumar as primary lead, with Vivek Oberoi, Kajal Aggarwal and Akshara Haasan playing the supporting roles. The film’s background score and soundtrack were composed by Anirudh Ravichander, whose soundtrack album released on 7 August 2017. Ajay Kumar, a former counter-terrorism agent, is called for a special mission. However, he is betrayed by his friends and is accused of extremely treasonous acts.

Vanamagan is a 2017 Indian Tamil-language action-adventure film written and directed by A. L. Vijay. The film stars Jayam Ravi and Sayyeshaa, with Prakash Raj, Thambi Ramaiah, and Varun in supporting roles. Harris Jayaraj is the music composer. Kavya, a rich girl, goes to a restricted area in Andaman to celebrate the New Year with her friends. While evading the forest officers in the jungle, she knocks Jara, a tribal man, in her car.

Si3 is a 2017 Indian Tamil-language action film written and directed by Hari. A sequel to Singam II and the third film in the Singam film series, it stars Suriya and Anushka Shetty, along with Shruti Haasan in the lead roles. It is the fifth collaboration of Suriya and Hari. Durai Singham, an honest and uncompromising DCP, takes on a businessman and his goons who are involved in illegal dumping of toxic waste and causing serious health concerns.

Vikram Vedha is a 2017 Indian Tamil-language neo-noir action thriller film written and directed by Pushkar–Gayathri and produced by S. Sashikanth under his banner Y NOT Studios. The film features Madhavan, Vijay Sethupathi, Shraddha Srinath, Kathir, and Varalaxmi Sarathkumar in the lead roles. Prem, Achyuth Kumar, Hareesh Peradi and Vivek Prasanna play supporting roles. Sam C. S. composed the soundtrack and score, while P. S. Vinod handled the cinematography. Inspired by the Indian folktale Baital Pachisi, the film tells the story of Vikram, a police inspector who sets out to track down and kill Vedha, a gangster. After Vedha voluntarily surrenders himself, he tells Vikram three stories that change his perceptions of good and evil. Vikram, a pragmatic policeman, and his partner Simon are on the hunt to capture Vedha. When Vedha voluntarily surrenders, he offers to tell Vikram a story, throwing Vikram’s life into disarray.

Mersal is a 2017 Indian Tamil-language action thriller film directed by Atlee and co-written by Atlee, K. V. Vijayendra Prasad, and S. Ramana Girivasan. The film stars Vijay in a triple role as a father and his two sons alongside Nithya Menen, Samantha, and Kajal Aggarwal. The background score and soundtrack were composed by A. R. Rahman, while the cinematography was done by G. K. Vishnu and edited by Ruben. The story revolves around two twin brothers in which one is a magician avenging for his father’s death and medical crimes. The other one is a reputed doctor who charges meager amounts from his patients. Maaran, a doctor, is falsely arrested for the murder of his colleague, Dr.Ar.jun Zachariah. He soon discovers that the real culprit is a lookalike who aims to expose corruption in the medical industry.

Pa Paandi is a 2017 Indian Tamil-language comedy-drama film, written and directed by Dhanush in his directorial debut. He also produced the movie under his studio Wunderbar Films. The film revolves around Pa Paandi, a retired ex-stunt master in the film industry, travels to Hyderabad to seek out for freedom, and also to reunite with his old village lover. Revathi, Prasanna, and Chaya Singh play supporting roles in the film. Dhanush, who produced and directed the film, portrays a cameo appearance in the film as the younger version of the protagonist, while Madonna Sebastian, Gautham Vasudev Menon, and Dhivyadarshini too played cameo roles. Pandi, a retired stuntman, has argued leaves home to find his long-lost love, Poothendral. They meet and Poothendral invites him home for lunch where he is reunited with his son and grandson.

Spyder is a 2017 Indian action thriller film directed and written by AR Murugadoss. Shot simultaneously in Telugu and Tamil, the film stars Mahesh Babu, S. J. Surya and Rakul Preet Singh in lead roles. Harris Jayaraj is the music composer and Santosh Sivan is the cinematographer of the film. The production of the film and the film’s principal photography commenced in July 2016. The first look of the film was released on 12 April 2017, while the teaser was released on 1 June 2017. Shiva, an intelligence officer, develops a phone software that helps him track those in need of help. He sets out to save the people of Hyderabad when he realizes that a serial killer is on the loose.

Motta Shiva Ketta Shiva is a 2017 Indian Tamil-language action thriller film[1] directed by Sai Ramani, starring Raghava Lawrence and Nikki Galrani in the leading roles while Sathyaraj and Ashutosh Rana play supporting roles. The film is a remake of the 2015 Telugu film Pataas. The music was composed by Amresh Ganesh with editing done by Praveen K. L. and cinematography by Sarvesh Murari. The film began production in November 2015 and was released on 9 March 2017. The film was dubbed into Hindi as ACP Shiva by RKD Studios. Shivakumar IPS, a corrupt police officer, joins GK, a local politician, in his immoral activities. When GK’s brother kills his best friend, he decides to turn his life around.

Bogan is a 2017 Indian Tamil-language supernatural action thriller film written and directed by Lakshman and produced by Prabhu Deva and Ganesh. The film stars Jayam Ravi, Arvind Swamy and Hansika Motwani in the lead roles. Featuring music composed by D. Imman, the film began production during March 2016 and released on 2 February 2017. Jayam Ravi and Arvind Swamy portrayed both the protagonists and antagonists respectively. Vikram, a police officer, is investigating robberies in a jewelery shop and a bank, which seems like an inside job until he realizes that the person involved is someone he knows.

Kadamban is a 2017 Indian Tamil-language action drama film written and directed by Raghava and produced by R. B. Choudary under Super Good Films and associate produced by B. Suresh, B. Jeevan, Jithan Ramesh, Jiiva, and Arya under The Show People and Riwaz Duggal. The movie is the Indian adaptation of James Cameron’s 2009 epic film Avatar. Arya and Catherine Tresa feature in the leading roles. The music was composed by Yuvan Shankar Raja, cinematography by S. R. Sathish Kumar, editing by Deva, art directing by A. R. Mohan, and stunt choreography by Dhilip Subbarayan. The movie was dubbed and released in Telugu as Gajendrudu. “The Hindi rights of the film were purchased by RK Duggal Studios for a record price. The Hindi trailer was launched on 6 May 2017, and the Hindi dubbed version was released under the same title by RKD studios. Kadamban along with a group of villagers wages a war against a powerful businessman, who wants to destroy the forest surrounding Kadamban’s village for his greed.